You can never have too much of a good thing! Except… can you? Platelets are the cells that help blood clot so we can stop bleeding when we get cut.  But the mouse brains in the current dataset might have too many. For the first time, Stall Catchers is accelerating Sickle Cell Disease (SCD) research, so we asked scientist Nancy Ruiz to  explain what this is all about.

Nancy Ruiz explained to us that “SCD is a blood disease where the red blood cells lose their round shape and break down. This condition leads to painful episodes, anemia, fatigue, infections, among others.”

“To compensate for the shortage of healthy red blood cells, the spleen starts to overproduce platelets, a type of white blood cell involved in infection and immunity. We have seen that SCD mice have a large amount of platelet-like cells in the brain, which could potentially lead to capillary stalls and behavioral deficits.”

When these stalls are in the brain? Even worse!

We know these stalls are connected to Alzheimer's disease in a big way, which is why we want to find a way to reduce them. The tricky part? We aren’t sure if there’s more than one cause for these stalls. In fact, it’s more than likely that stalls are caused by many DIFFERENT things, possibly even an abundance of platelets. Yikes…

But what about mice with SCD? Do they have higher amounts of stalls? Well, we’re trying to find that out too. That’s where you come in! Once the Community of Catchers has put their keen eyes on these new images, we’ll hopefully have an answer.

We’ve already made some headway with our previous data analyses. Quite a bit, actually! (In fact, there’s a dataset in Stall Catchers RIGHT NOW that could give us some hints on a way to treat Alzheimers. Read about that HERE.)  Are we done analyzing Alzheimer’s data - no way!  But while we are waiting for more data from our current Alzheimer’s study we have an opportunity to analyze the SCD data and study a new angle on capillary stalling.

What are we hoping to learn?

Once this dataset has been analyzed in Stall Catchers, Dr. Ruiz will analyze it to see what might be causing these stalls. Will we discover that these stalls are caused by platelets after all, or by something else, like the inflammation that we think is causing the stalls in Alzheimer’s disease? If they ARE caused by platelets, would we be able to clear up the stalls with an anti-platelet antibody, and if so, could that reduce SCD symptoms?

These are questions we want answers for and your role is key! 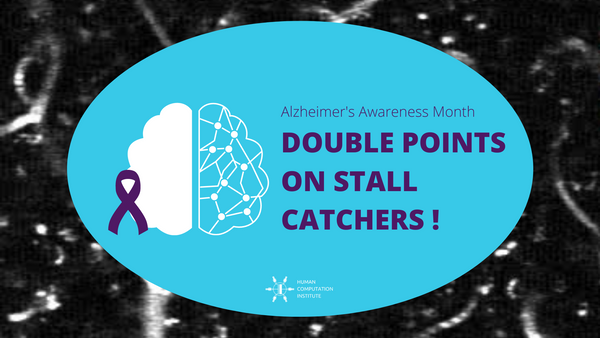 In recognition of Alzheimer's Awareness Month (September 2022), we are doubling points in Stall Catchers for NINE one-hour time slots during the last three days of the month.

We have a new dataset for you and it's not just any dataset... PSGL-1 is our first dataset in Stall Catchers looking at the effects of a FDA approved drug in the treatment of Alzheimer's.