Hey there, the loyal catcher community! We have some news :)

However, having two brands for just one thing has been confusing! So we decided to let go of the "EyesOnALZ" brand, and rebrand all our social media and other channels to Stall Catchers. See why and how we're implementing this change below. (Take special note of the social media handles!)

There will be no changes to where and how you play Stall Catchers though, don't worry! :)

Historically, the name "EyesOnALZ" was created to encompass at least two (and possibly multiple) games that tackle Alzheimer's disease. Our original plan included one game based on stardust@home (Stall Catchers), and one on Eyewire: 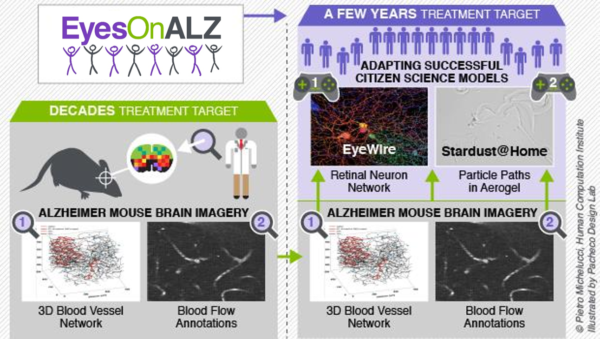 We were still on course for that after year 1 of the project (see 1st year update here):

Moreover, Stall Catchers is certainly our first born, but we have another one on the way! This year will be putting a lot of effort into the game #2, which will focus on 3D tracing of vessels in the mouse brain. Similar to our friends EyeWire, EyesOnALZ game #2 will help us understand where and why do stalls occur, in the 3-dimensional context of the brain!

But we ended up not doing the game #2, because our colleagues from Seung Lab, Princeton, and the Schaffer-Nishimura Lab at Cornell figured out how to do that part of the project (tracing and mapping the blood vessels from the mouse brain) automatically, with new machine learning algorithms! That was great news, as we want to use computers wherever possible, keeping only the really difficult tasks for humans. And not wasting human time and brain power if we don't have to!

However, since we ended up not needing the second (Eyewire-based) game, we now effectively have two brands for only one thing! In addition, we are also currently working on cloning Stall Catchers to a number of other games tackling various diseases (more very very soon!). Since they are not about Alzheimer's disease, they cannot fit under the "EyesOnALZ" project umbrella.

So all things considered, we decided to retire the historic "EyesOnALZ" project name. Stall Catchers will now be the only brand we use for Stall Catchers :)

We are also rebranding our social media!

So please take note of the below so you tag us correctly when talking about us!

That's that! :) Hopefully now it will be less confusing which name to use, and which account to tag while talking about Stall Catchers!

Please let us know if you have any questions or concerns though. We thrive on community feedback! :)

Yes, you heard that right! Stall Catchers, a citizen science game tackling Alzheimer's disease, just had a spin-off, called Dream Catchers! Dream Catchers is very similar to its predecessor... but

Thank you to everyone who join our first community hangout on World Alzheimer's Day last Saturday, and all the awesome questions! Here's the recording of the "eye-opening" chat