Anyone who has played Stall Catchers recently might have noticed things slowing down. And thank goodness you told us, because that gave us a chance to fix it! It’s now running about 5x faster than a week ago, so if you haven’t played in a while – go log into StallCatchers.com and check out how speedy it is! 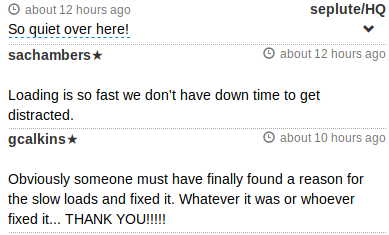 Music to my ears!
Pietro

That said, we want to explain what happened. Stall Catchers is a living breathing organism – literally, because it is powered by humans. But it has a life of its own in some ways, and it is growing constantly. It’s kind of like an adolescent – it’s gaining lots of new info, but doesn’t always know the best way to use it.

Each time we add a new research dataset to Stall Catchers, so we can answer an important Alzheimer’s research question, the database gets bigger. That means when we ask the database to send you a new vessel movie, it has to search through larger and larger piles to find exactly the right one – one you haven’t seen before, one that isn’t too easy or difficult, the next most important one needed for the analysis, and so on. For anyone playing Stall Catchers, this translates into an overall slow-down in the game.

Fortunately, several of our catchers alerted us to this fact by email and comments in the online chat – some providing very useful details about the exact moment at which delays occur and how long they are.

Getting to the root cause of these issues can be challenging. Just give you an intuition about it, imagine you have a refrigerator that looks like mine – half the food has already expired

Each of these food selection strategies listed above ends up being affected by grocery shopping habits. What if you suddenly have five times as much fruit as vegetables? Or what if certain kinds of food have a shorter shelf life than others. What goes into the fridge can impact which food selection strategy makes the most sense.

These are the kinds of challenges we face with the movie selection process in Stall Catchers. There are lots of factors that sometimes weight against each other – user experience, analytic efficiency, and priorities on which data should be analyzed in which order to help us get an early prediction of the research results.

Occasionally when we make performance improvements to Stall Catchers, it is done situationally, in a pinch. For example, we might optimize the user experience for a big Catchathon event. In those instances, we can have near term benefits but then long term liabilities that show up as unexpected slowdowns as we near the end of a dataset. But in general, our goal is to make lasting improvements that consider the future growth of Stall Catchers in terms of participation, data volume, and research needs.

Last week, we made two changes that reduced the wait time between vessel movies by a factor of five – from about ten seconds to about two seconds. We accomplished this in two ways – first (to borrow from the analogy) we realized we were unnecessarily sorting each food group by type (e.g., fruits were being sorted into bananas, oranges, etc.) which was not necessary and took extra time. Eliminating this extra level of sorting, cut the wait time in half. The next thing we tried was equivalent to removing the expired food before sorting what was left into food groups (previously this happened the other way around). This cut the time in half yet again.

That said, this addresses only one phase of the vessel annotation cycle – the part where you click the “Next” button and wait for the next movie to load. But there are other waiting periods – such as when you click your answer and wait to see the response. I believe we can make substantial further improvements to all phases of the annotation cycle and, indeed, I am bring the Stall Catchers software code to an exclusive Microsoft Hackathon next week called “Hack for Good”, where Microsoft’s best and brightest engineers will volunteer their time for 48 hours to help us take Stall Catchers from “usable” to “blazing”!

We’ll keep you posted on our progress, but the best way to find out is to see for yourself :)

Can you believe it?! So far in Stall Catchers you've helped us analyze six datasets (and that's not counting the validation ones!), and we're currently on our seventh!! Each dataset

A couple of weeks ago, after completing the "Long Term" dataset (see report here) we uploaded new data to Stall Catchers dealing with the VEGF molecule. Read all