We've just been through another major Stall Catchers event - the first-ever Catchathon, and we have celebrated the participants and the winners... but what about the people who made that happen?!

First of all, like to thank the whole team of EyesOnALZ who took care of every aspect of the event, our sponsors the BrightFocus Foundation who paid for all of it, including the pizza 😜🍕 our partners The Crowd & The Cloud who promoted the event, helped recruit participants worldwide & lead the live stream...

But most importantly, we'd like to thank the most invisible - and the key person who made the Catchathon (as well as all other Stall Catchers events & day-to-day catching) happen with her hard work!! Our software developer - Ieva 😊

Here's all you need to know about Ieva, by our lead, Pietro Michelucci:

Ieva Vaišnoraitė-Navikienė, the lead software developer on the EyesOnALZ team, literally built Stall Catchers from scratch. Ieva, a native Lithuanian, single-handedly re-implemented the stardust@home interface from the ground up to create the virtual microscope used in Stall Catchers, and continues to implement new features and updates on a regular basis. But that only scratches the surface of Ieva's contributions to EyesOnALZ.

Anyone who has participated in a Stall Catchers event knows it is often accompanied by the release of new features, such as the ability to create Teams or to come back later and "Redeem" points for real movies. Ieva's dedication to supporting these events ensures that features are ready to go at the right moment, which has at times required some degree of heroism on her part, especially when unexpected things come up (which, thanks to Murphy's Law, is almost always).

Ieva's interests transcend software engineering, however. She is also a student of Machine Learning and is currently pursuing automated methods that could reduce the number of vessels that need to be annotated by humans. If she were successful, it would speed up the Alzheimer's research even more.

One of the strengths of the EyesOnALZ team is its diversity, which often leads to impassioned discussions at the roundtable. Ieva is indispensible in these conversations, interjecting sharp insights with grace and humor. She is our "Cool Hand Luke" (great movie if you haven't seen it!). For all these reasons and more it is a great pleasure to finally "sing" about this EyesOnALZ hero.

Thank you, Ieva, for everything you do for our project, our team, and for humanity.

Click to zoom! Check out the rest of the Catchathon updates here. 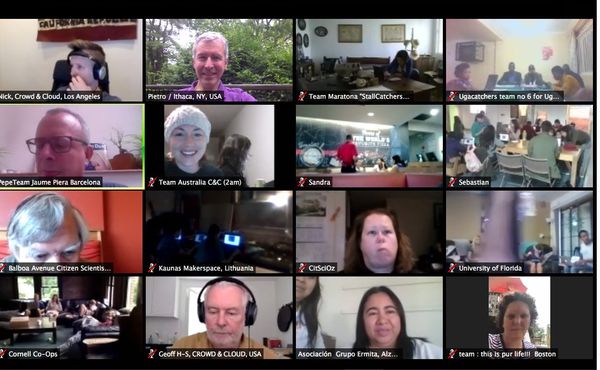 Hey ho everyone - THANK YOU SO MUCH for joining us in the epic, first of it's kind Stall Catchers International Catchathon on Saturday 😊 the winners are announced in this